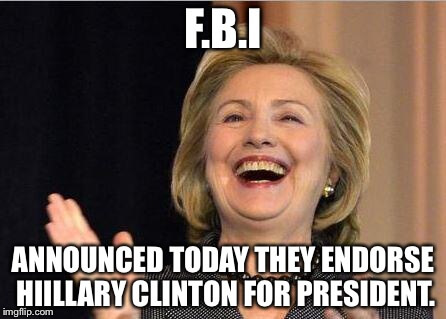 In his announcement speech to a national audience Comey said:

“Although there is evidence of potential violations of the statutes regarding the handling of classified information” We really don’t want anyone to do anything about it.

Going on to say:
“…there is information that they were extremely careless in their handling of very sensitive, highly classified information.” And if you did it, your butt would be in jail. But she is Hillary Clinton, so we are just going to let this slide.

In finishing his endorsement with the burning down of the F.B.I he concluded:

“To be clear, this is not to suggest that in similar circumstances, a person who engaged in this activity would face no consequences. To the contrary, those individuals are often subject to security or administrative sanctions, but that’s not what we’re deciding now.” But again, this is Hillary Clinton we are talking about– not you. And since you are a peasant you can rot in a jail cell but we ain’t touching Hillary.