The Not So Smart Phone! Are you sick of yours yet? * DailyLoL

Am I crazy or do you also reach for your stupid cell phone/computer/email device/social media machine/leash every morning as soon as your eyes open from sleep.

Damn I hate that I do that. I wish I could say that I’m grabbing for my phone because there may be some urgent message waiting for me, but the truth is, I just want to check Facebook and see if the world ended while I was sleeping and not paying attention. Did Kim Jong Un and merry band of North Koreans find enough phone books to stand on so they could reach their nuclear button? I’ll check Twitter.

You must admit though, the smart cell phone is a pretty handy invention. You’ve got the world at your fingertips and all the information you can imagine, and yes, it does serve as a great alarm clock. It’s one you aren’t always tempted to throw across the room.

​I tend to get up pretty early in the morning which means I have become intimately involved with the alarm clock and most specifically the snooze button. Personally I hate mornings. I’d love to sleep in. My phone, however, beckons me. 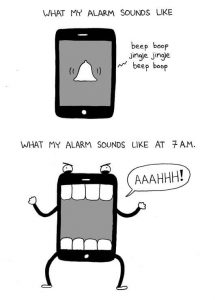 ​My mother used to say, “Each day you wake up you have a choice. You can have a good day or you can have a bad day, so you might as well have a good one.” Yeah well I’m gonna choose which nursing home she goes to and it won’t be the good one. ​​

If I could meet the guy that invented the snooze button I would like to punch him in the face…every five minutes.
​
Don’t you love that alarm. You’re deep in a dream about a sandy, sunny beach with the ocean waves crashing on the shore and the sunlight is dancing across your body as Bo Derek circa 1979, or maybe Kate Upton, Jessica Alba, and/or Monica Belluci are waiting for your embrace. For you gals it could be Chris Hemsworth, The Rock, Peter Dinklage, Denzel Washington or Donald Trump that come running toward you…hey I don’t know what kind of freaky stuff you’re into…and then all of a sudden beep beep beep beep…Why is there a garbage truck backing up on your beach? Microwave popcorn is falling from the sky…Denzel don’t leave nooooo Denzel come back. Suddenly the images of Bo Derek circa 1979 running is replaced by the fat face of your boss looking over your cubicle wall. Gah!

​Ah yes the alarm clock… that destroyer of dreams. the demolisher of hope and fantasy. And no matter how many times you hit the snooze button you just can’t get back to the beach. If hitting the snooze button were an olympic sport I’d win gold. Instead it’s become the only way i get any exercise. Five sit ups every day just to hit that stupid button.
​What they should do is instead of an alarm sound it should be the sound or little running doll feet and a voice that says “I’m coming to get you.” I’M UP! 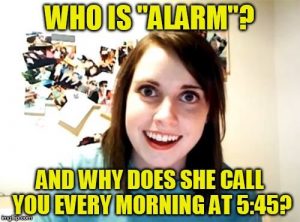 ​Have you seen those alarm clocks that have wheels and run all over the room when they go off? What sadist came up with that gimmick. That crap wont fly here in the south. We have shotguns.

​Either way, I’m glad I can just depend on my stupid phone. Sometimes even forget that you can actually use it to talk to other human beings. Nifty. Oh and No mom I won’t make you go to the nursing home…again.

Next The Man Romper!